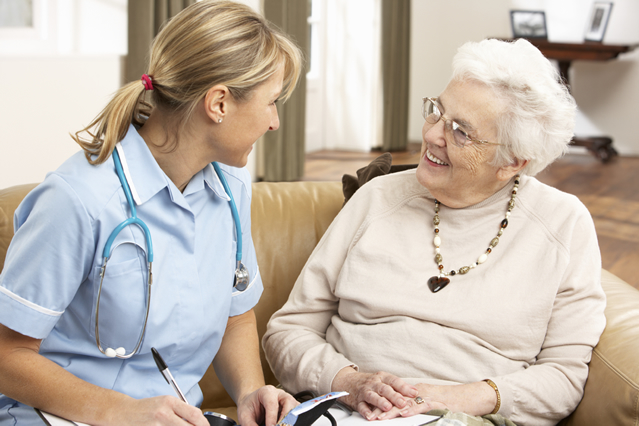 Bonnie Ewing, of Alliance, can’t say enough about Alliance Hospice, who cared for her sister, Barbara Herren, in the final year of her life.

Before her death in June, Herren suffered from dementia, progressively getting worse in the five years she had lived with Ewing.

“People should be aware when a family member starts to have things that just don’t seem like a normal conversation or normal behavior,” Ewing said, recalling the first signs that her sister had dementia.

Rather than putting her in a nursing home, Ewing decided to care for her in her Alliance home, which she admitted wasn’t easy and was tiring, but was the right decision and one family members should make.

Ewing described dementia as a very involved situation, where things change daily and it progresses to where the person can’t talk and doesn’t know you, and it seems like they are in a different world. “It’s very difficult,” she said.

She stressed the importance of family giving of their time for their loved one to show their care and concern. “It is so important for a family member who lives in the area to do routine visits,” she said. “Whether it be a parent or a sibling who lives close by; routine, once a week visits with their loved one [are important]. If nothing else just hold the person’s hand for an hour.”

One person who went above and beyond that was Ewing’s daughter, Kathy Lombardi, who was close to her aunt and stepped up to help Ewing care for her. She was also the recipient of Herren’s last words, when Herren grabbed her face and said, “Kathy, I love you so much” out of the blue after not speaking for almost a year. “That was, I guess, Barbara’s goodbye to Kathy,” Ewing shared.

When more assistance was needed in Herren’s care, Ewing was able to enlist the help of Alliance Hospice, whose combination of medical staff, social workers and volunteers help patients and their families navigate difficult illnesses like dementia, often while staying in their own homes or with family members.

Every Tuesday and Thursday at 6:30 a.m., nurses’ aid Bambi Plauger would come bathe and care for Herren. Plaugher said she enjoyed coming to take care of Herren and remembered fondly one time she did Herren’s nails.

“It was wonderful. I loved taking care of Barb and I loved coming in here and seeing Bonnie,” Plauger said. “I just loved this family so it’s sad when you don’t get to see them -- you get attached to the family, too.”

While many others were involved in Herren’s care, Ewing is especially thankful for nurse Diana Fotheringham who was there for them at the end.

Ewing recalled hearing her sister gasp and calling Fotheringham who came right over. “As Diane was taking her vitals, she looked at me and said, ‘I think she’s passing now,’ and she was,” Ewing recalled. She said the nurse stayed with her until the funeral director came to get Herren. And Fotheringham and a few others even attended Herren’s funeral service.

Fotheringham remembers Herren as a gentle patient who would often touch her face or hold her hand. When talking about how she does the difficult Hospice work, Fotheringham said, “You cry on the way home, or sometimes while you’re there.”

“The organization is absolutely superb in my opinion,” Ewing said of Alliance Hospice. “They’re professional, they’re compassionate, kind; anything you would ask them to do they would do.”

In a letter written to the organization accompanied by a donation, Ewing praised everyone from the nurses to the social worker to the pastor who did Herren’s funeral service.

“This community is so fortunate to have an organization like Hospice,” Ewing said, “And people should support it financially. Without the financial support, there wouldn’t be an organization.”

She stressed that anytime there is a fundraiser such as the Steppin’ Out for Hospice 5K coming up Saturday, the community should come out and support it, especially family members who have been helped by Hospice.

The Steppin’ Out for Hospice 5K Run/Walk will begin at 7:45 p.m. Saturday. A 1K Kids’ Run/Walk for those age 10 and under will begin at 7 p.m. The starting line is in front of the hospital’s main entrance at 200 E. State St. Awards will be given to the top overall finishers and top finishers in each age group. Participation medals will be given to all the kids in the 1K. Cost for early registration is $20 for the 5K and $10 for the 1K. Registration on event day is $25 for the 5K and $15 for the 1K. For more information, call the Alliance Community Hospital Foundation Office at 330-596-7516 or visit www.achosp.org.

Another fundraiser the community can attend to support the organization is the Steppin’ Out for Hospice Pasta Dinner to be held from 4 to 6:30 p.m. Friday in the hospital cafe. Cost is $7.50, and carryout containers are available. All proceeds benefit the Alliance Hospice program.