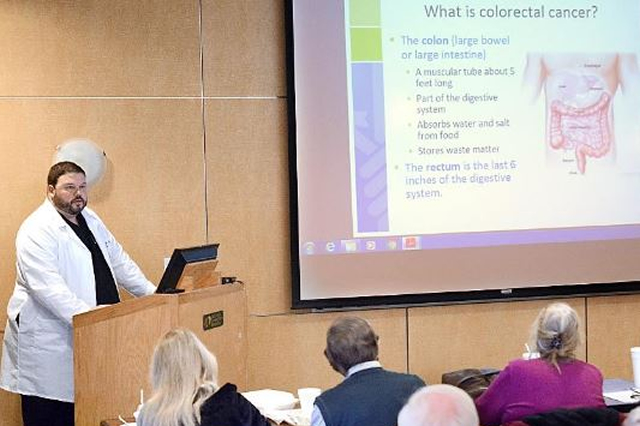 Dr. Jonathan Hlivko, gastroenterologist at Aultman Alliance Community Hospital (AACH), presented "What You Need to Know about Colorectal Cancer and the Importance of Screenings" during Friday's Lecture Luncheon held in the McAlister Community Room at the hospital.

Hlivko told the crowd that colorectal cancer is the third most common cancer in both men and women in the U.S, and if you combine men and women, it is the second leading cause of cancer death in the U.S.

"The big thing about it is that about half of all the cases could have been prevented if people had just had a screening done," he stated. "So that's the most frustrating thing and that's why we spend so much time trying to educate people because we want people to get screened."

The doctor explained the anatomy of the colon, the large intestine that is part of the digestive system and absorbs water and salt from food as well as storing waste. The colon is a 5-foot long tube, with the last 6 inches being the rectum.

He explained that cancer is the growth of abnormal cells which invade and damage normal tissue, and he said colorectal cancer starts in the colon or the rectum.

"We don't know the exact cause of most colorectal cancers," he admitted. "What we do think is that somehow it's likely related to changes in the genetic material in our cells and that is somehow related to our lifestyle."

Hlivko went over risk factors, which include age (50-plus), a diet high in red meat and processed meats (diets high in fruit and fiber lower the risk), lack of physical activity, being overweight, smoking, alcohol use and Type 2 diabetes. He said those with inflammatory bowel disease, those who have had polyps in the past or those with a family history of polyps or colorectal cancer are also at greater risk.

"Most colorectal cancers develop from a polyp," Hlivko said. "For some reason the cells start changing and they grow into one of these polyps, and then if left unchecked or if we don't do a colonoscopy and remove that polyp, it can eventually invade into the rest of the colon around it and turn into a colon cancer."

He said screenings are done to find and remove polyps before they can become cancer or to catch cancers early so they can be treated early and have a better outcome.

Hlivko went over the screening tests that find both polyps and cancer, which include a flexible sigmoidoscopy (which views only 2 feet of the colon), the traditional colonoscopy (a scope that covers the whole colon), as well as double contrast barium enema or CT colonography, which are both imaging modalities that can look at the colon. He said the newest test, the CT colonography, is a good test but can miss small polyps.

"A lot of people think when they choose one of these they can get away without doing a bowel prep, but that's the problem -- they still have to do a bowel prep because you need the stool out of the colon so it doesn't look like a polyp or something else," he explained. He added while there are good tests in certain situations, he still believes the traditional colonoscopy is the best choice.

There are also a few stool tests that can detect colorectal cancer, but he said the problem with these tests is if you have a large polyp that hasn't changed into anything yet, it won't detect it. Since these tests miss most polyps, they won't be able to catch a polyp before it turns into cancer.

He said sometimes when it comes to screening tests, the best one is whichever one the patient will agree to, as patients can be leery about more invasive tests. "If you can't get the process started then you're just missing the boat in general," he said, adding it's better to get something started than nothing.

To help reduce risk of colorectal cancer, he recommended the following:

Before answering a number of questions, he reminded the audience that early colorectal cancer usually has no symptoms, which is why screenings are even more important.